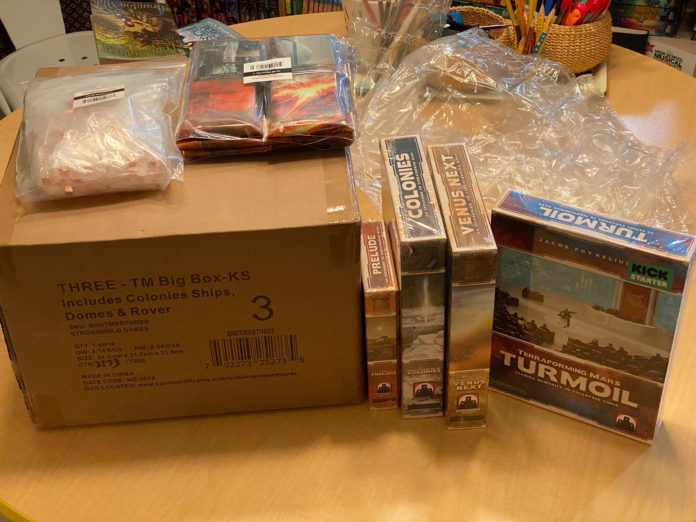 Almost exactly a year ago, I pledged some money to Terraforming Mars: Big Box + 3D Tiles. I finally received shipment of almost the entire Kickstarter offering today and opened up the box. I can’t tell if I’m more excited about being feature complete for one of the best rated board games (#4 on Boardgamegeek.com) with official components, or for opening all the boxes and putting all the pieces together, or to actually play the game. I am missing one of the expansion sets, Hellas & Elysium, but I have faith Stronghold Games will make things right.

Yeah, I haven’t played the game yet. I’ve owned the base game for some time now but pandemic and all has kind of put a damper on getting to experience it with friends. Plus, I’m knee deep in Gloomhaven anyway and it’s difficult to willingly not play that when given the chance. But I’ve opened up enough board games to enjoy the process of getting them set up: punching out tokens, sleeving cards, reading rule books, etc. The Terraforming Mars Big Box set ups the ante by including a set of 3D printed tiles and they look gorgeous:

Production samples were used for the photo. Look how great they look! 3D printed tiles for Terraforming Mars isn’t a new concept. Some other Kickstarter projects have come and gone offering the same thing in concept but vary in execution.Â  But I like keeping everything official as much as possible, so the Big Box project was right up my alley. It’s like mixing LEGO with an off-brand, not something I’d be prone to do.

Since I was missing one of the expansions, getting everything organized will have to wait for another night. I can’t wait.